Hebelstabwerke
Reciprocal Frame Structures. Objects In Mirror Are Closer Than They Appear

The research project „Objects in Mirror are closer than they appear” studies traditional constructions and its potential for contemporary building.

The subject of the first project is the research of construction systems that allow realizing large spans composed of short elements. Historic research shows that such systems have been existing forhundreds of years. They were developed due to a lack of suitable wood for construction or to limited capacities of transport. Today these methods are becoming interesting again. They can serve as a starting point to develop new construction techniques in hardwood that work with short members and simple timber joints. Another advantage of these systems is the fast and simple assembly due to handy element sizes.

The project focusses on Reciprocal Frame Structures. The structural principle of mutually supporting beams in a closed circuit, the Reciprocal Frame, has been used in countless vernacular buildings and studies of Renaissance architects in the form of two- and three-dimensional grillages. As the curvature of the structure depends on the dimensions of a single element, a variation of one beam results in a recursive adaptation of the global structure. Therefore especially the control of irregular structures so far has proved to be very difficult.

In a research project the team is working on the development of a digital design-tool that introduces new possibilities for architectural applications using Reciprocal Frame Structures. It shall allow the designer to develop a differentiated woven structure working with parameters as form of plan, level and number of feet, openings, density and radius of curvature. During the design-process the static behaviour is analyzed and optimized in iterative steps. Once the global form and the position of the elements towards each other is found the geometry of the knots is calculated for CNC manufacturing. The principle ( one beam is supported by two other beamsand is loaded by at least one beam) needs to be fulfilledlocally in every unit, regardless of its form and size. This rule enables the functioning of the system even with chaotic distributions of the units. These chaotic distributions require different geometries for every single element and joint. However, with modern CAD and scripting tools the complexity of designing and constructing one-of-a-kind elements in irregular RF is possible.

The research will offer numerous opportunities for architectonic applications. During the autumn term 2010 the design tool has been applied in a student design course and two summer pavillons have been realized on the ETH campus. 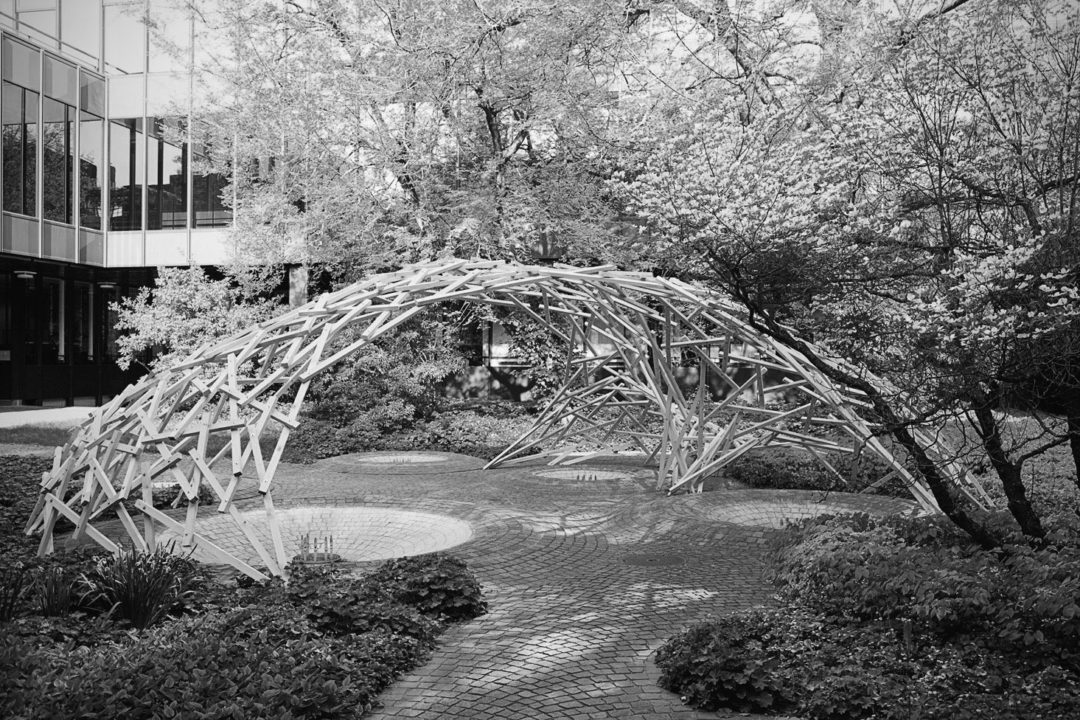